How movement analysis helps us help you

Once upon a time..
Like most doctors/P.T.'s, I used to use a standard process of finding what was wrong with my patients. It usually consisted of testing the affected area with orthopedic tests.  As I pursued my rehab specialty I found that there is more to consider, that the hip bone is indeed connected to the thigh bone. I was taught to look at the whole, as opposed to the sum of it's parts.  In previous posts I mentioned how the hip can be a major contributing factor in lower back and knee issues(see "The bad neighbor"), today I want to share how we find just that.
Our body is a moving chain?

At least that's what I used to tell everyone, but really it's alternating series of mobile and stable links. Life is dynamic, and we ask our bodies to move and conform to every imaginable task we set out to perform (sit, stand, crouch, squat or crawl).  There is a  new approach in manual medicine(Chiropractic and Physical Therapy) called Functional Movement Analysis is a new approach that we use to figure out why certain movements, or lack thereof, are causing the body to overuse and break down. It tells us if the areas that should be moving are moving & if the areas that are supposed to be stabilizing are stabilizing.  These patterns are universal to all of us and when disrupted or absent create undo stress to certain critical body parts. 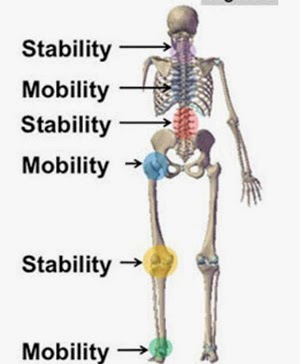 What's in a test?
Any movement can be a functional test, something as simple as watching someone rise  from a chair, squat down or jump down off of a box.  Lets consider the squat. By analyzing figure 1 the squatter on the right needs to work on the amount her upper back can bend backward (extend). She could also use some lower back stability training and ankle mobility as well. Hopefully it's easy to imagine the squatter on the left being able to endure more squatting without injury over the squatter on the right, because that is the case.

These female athletes were asked to drop off the box and then jump as high as they could, you can see that the athlete in figure A maintains the space between her knees while the athlete in figure B collapses. The second athlete has a much higher rate of ACL tears because of the hip weakness, she shows in this movement test. Finding and correcting that flaw may save her athletic career.